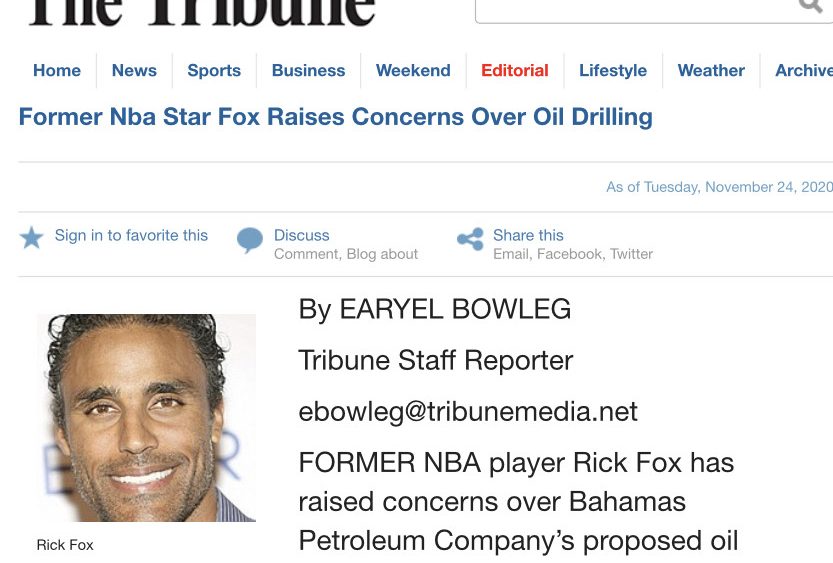 The Bahamian-Canadian joined the chorus of those expressing uneasiness about BPC’s venture in a Facebook post to his 392,000 followers. However, Mr Fox didn’t state outright whether he was for or against the project.

Instead, he took a look at the arguments for both sides while questioning aspects of the project. He acknowledged the profit to be gained potentially if the oil exploration proved to be successful.

“This has been a ten-year process slowed by COVID which they have spent $100 million preparing to drill for proof of oil in Bahamian waters – which they are expecting to discover some 1.4 – 2 billion (barrels) from the Southern Bahamas waters – if I do fast math – that’s 88 billion dollars of gross at today’s price for a barrel. This is a small percentage of the total potential haul at the end of the day from The Bahamas in total,” he noted.

Mr Fox linked an article from Oil and Gas 360, a news and information site about the oil and gas industry, giving an update on the drilling of the obligation exploration well “Perseverance #1” and the company explaining the benefit.

Mr Fox suggested oil drilling appeared to be working for “other Caribbean countries,” writing in his post, “don’t you want to be like them?”

He referred to previous comments made by the company’s CEO Simon Potter who said many other nations “have over the past decade safely and responsibly drilled offshore wells, developed or continue to develop offshore hydrocarbon resources, and reaped the economic benefits of an established or a whole new industry. Moreover, these other nations have been able to do so at the same time as seeing growth and development of existing industry sectors, such as tourism.