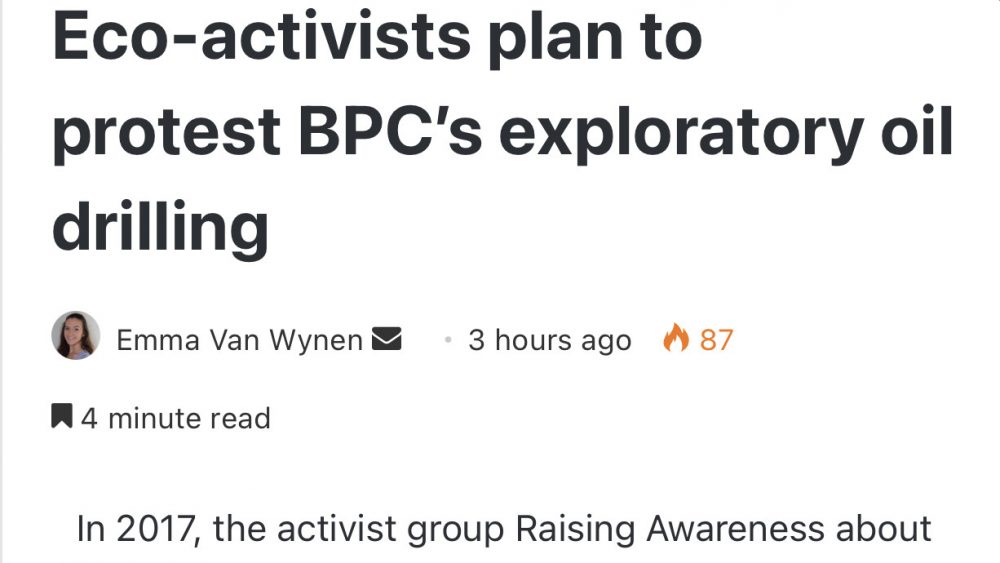 In 2017, the activist group Raising Awareness about the Bahamas Landfill (RABL) staged protests against what, at the time, were serious concerns about the state of the city dump on New Providence.

Today, the group, which uses social media to engage other interested Bahamians, is turning its focus on a new cause: protesting the Bahamas Petroleum Company’s (BPC) exploratory oil drilling, set to commence later this month.

The announcement was posted in RABL’s Facebook group this week.

News that BPC intends to drill its exploratory well this month came as a punch in the gut for some Bahamians who see the planned exercise as a massive risk for The Bahamas.

“It’s incredibly concerning,” said Heather Carey, an eco-activist with RABL, who advised of the planned protest.

“We’re doing this protest so that people can realize that they still have a voice.”

The protest will take place on Saturday, December 19 and is expected to run from 11 a.m. to 1 p.m.

The location of the protest will not be announced until the morning of, according to Carey.

Given ongoing health protocols in light of COVID-19, it will take on a new form.

“Cars will line the roads in a prime location with high visibility,” Carey said.

“People can sit on their cars or stand in front of them— which maintains social distancing— and hold their banner saying what they have to say.”

Carey said no part of the protest will violate COVID-19 regulations or any law, as all vehicles will be parked in the grass on either side of the road to avoid any traffic related issues.

The reason why the location of the protest will not be made public until the morning that it happens is for fear individuals might try to inhibit the event.

“This administration is very well aware of the power of the protest,” Carey said.

She noted that current members of Parliament, including Prime Minister Dr. Hubert Minnis, who was in opposition at the time, joined previous protests staged by We March and RABL.

She said these experiences afforded MPs the opportunity to truly witness the power of the people.

“This time, they may decide they don’t want the voices to be heard,” Carey said.

“We don’t want to give [the government] the opportunity to quiet our voices.”

Carey said that since announcing plans for the protest on Wednesday afternoon, 50 to 100 people have already committed to participating.